A Ray of Sunshine 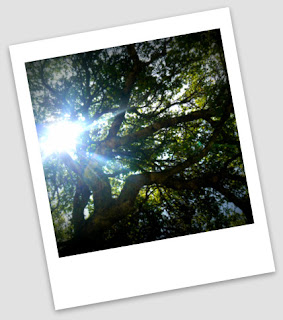 I woke up this morning feeling pretty good.
It was the morning of a second continuous day of sunshine and the birds were singing. I could hear them through the gap of the bedroom window I had left ajar before going to bed at night.
A little ray of sunshine sneeked through the curtains and made my nose tickle...
Somewhere in my mind I started to built an image of a younger version of myself lying on the soft but tickly green grass and I saw myself staring at the sky and the slowly moving clouds made of softest candy floss. I was trying to figure out what they resembled as they floated past my hazy vision. ‘That one, just over there looks like a boat, and there goes a squirrel’..
As I was lying there, in my imaginary place, I took a moment to look around my surroundings and sniffed the air to catch the fragrance of the honeyed nectar oozing out of the clovers that were blooming around me. The  velvet green grass with white and pale pink flowers reminded me of a cosy blanket and made me feel very relaxed and at peace.


A gentle breeze with cool undertone touched my cheeks. It took me deeper to my memories and reminded me of the early summer mornings of my Scandinavian childhood when I woke up at the crack of dawn, feeling excited for no particular reason. It was enough for me to know that I had woken up to a beautiful summer morning.
Anything would be possible during the summer. This was the season, after all, when the Mother Earth revealed fully the secrets she had been hiding under a cloak of thick snow for several months. So many exciting things to do; Surprises to be found under stones (some with several legs) and so many pretty plants to be examined! Caterpillars hiding under the thick green leafs.
And afterwards, once my toes would get tired of climbing up rock faces, enjoying the feeling of the cool, soothing water massaging my hot toes as I would sit there tipping my toes in the freshwater lake and lazily splashing the water around, breaking the calm surface of it, making circles with my toes. Just like little tornadoes of water.
And the fish, what about the fish? The endless, quiet, time-stopping hours of sitting down by the lake trying to catch fish. The little float bobbing in and out of sight in the clear blue water. The feeling of excitement bubbling and shooting up my chest when I would notice a tiny fish circling around the wiggly worm, curious at first, then unable to resist a bite. The feeling of patient joy while waiting for the right moment for the sharp pull of the rod so I could  praise the hook out of the water to catch the unsuspecting victim.  Yes, anything was possible!
I continued to lie there, in the green grass of my memories and made up thoughts listening to the birdsong and the buzzing of the bees.
Isn’t it curious how much information can be packed into a ray of sunshine?


I was inspired to write this little short story last year when a ray of spring sunshine invoked a set of memories from my childhood. It reminds me of the power of the unconscious mind and its ability to retain information and recall it at most unexpected times in response to various stimulus!
Posted by Teija at 16:13